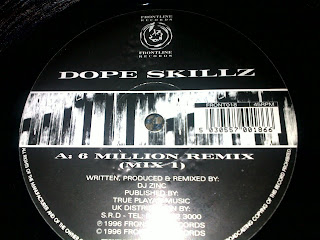 Mid-paced drum and bass track that sounds a bit like 'Super Sharp Shooter' by the Ganja Kru, but lacks a bit in the inventiveness stakes.

Reminds me of DJing at Dust. You stick this in the middle of a D&B set, and then just as people lose interest, slam into something really rowdy. Top DJ tip there, for nowt.

Not very exciting really. The smell of nightclubs, smoke and drunk teenagers.

Posted by ZakAvery at 19:12 No comments: 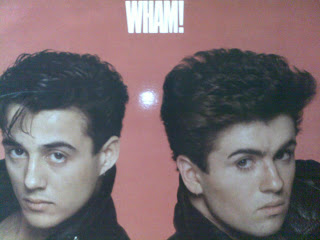 There's a card in Brian Eno's Oblique Strategies pack (you're at a web-enabled device, go and look it up) that says something like 'Take the most embarassing detail and magnify it'. When I started this blog, I knew there were some iffy records on the shelf, and some embarassing stories to go with them, so let's magnify and embarassing detail, shall we?

This reminds me of going to the Downton Memorial Hall discos with my mate Andy. I guess it would have been the last year of school, so this album had already been out for a few years. We were really into the shole psychobilly thing - The Meteors, King Kurt, swamp rock, The Cramps, enormous rock-hard hairsprayed quiffs and huge baggy combats. But like a lot of early teenagers, I guess we hadn't fully committed to it, because I know damn well we were listening to Wham!

I know that because I remember walking home with him after a Memorial Hall disco one night (it must have been summer, because I remember it was still light), and we were having a go at duetting 'Wham! Rap (Enjoy What You Do?)'. I thought we'd given it a pretty good go, but when we got to the end, he said 'you know Zak, there are these things called lyrics - the songs actually have right words. You should check them out'.

Happily I can't remember what I'd been rapping, but that's been a trademark of my music apprecistion over the years - misheard lyrics like you can't imagine. And yes, I'm aware of the irony of a vocalist/MC/rapper who doesn't listen to other peoples' lyrics.

Still, what's even more embarassing is I'm certain I didn't buy this at that time - it's a sneaky retro purchase. Let's just say it hasn't dated very, shall we? 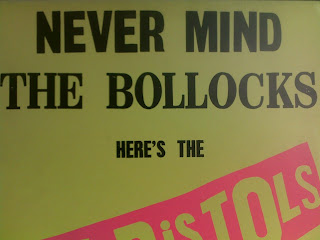 Although this is starting to show its age a bit in terms of production, the sneering, bile-fuelled attitude of this record is such that it still cuts a slice across your face with a jagged blade as soon as the needle hits the opening chords of 'Holidays in the Sun'. It doesn't really matter who played the music (there are rumours that at least half of it was done by session musicians), it's a perfect snapshot of a revolution taking place. And if the late Malcolm Mclaren was a svengali behind it, so much the better - I love a bit of situationism.

This reminds me really vividly of my brother, early 1980s. We had a portable tape recorder (they used to call them boom boxes, you know), and he had a tape of this album in it. He walked into the kitchen with it paused, and said 'Listen to this'. He released the pause, and the stanza of 'Bodies' just after the false ending kicked in. 'FAAHCK AND FAAHCK THAT! FAAHCKING IN THE THE FAAHCKHOUSE, FAAHKING BLACKS!' screamed Johnny Rotten. I looked at my brother, secretly envious that he'd laid his hands on this near-mythical (to a 1t year old) artefact from ancient history, but also appalled that he'd decided to play that bit of it in the kitchen, in front of our parents. Incredibly, they didn't notice, and later Jan confessed that he'd made a mistake by playing that - it was just a coincidence that he'd paused it at that point.

I still can't believe my parents didn't notice. It clearly made quite an impression on me.