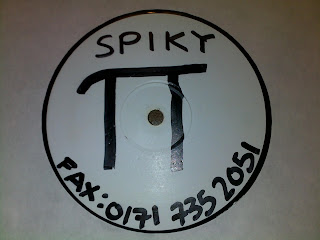 There was once a time when I was quite the dude. I managed, in February 1998 (I think it was) to snag a single of the week in the Vibes section of the NME. Notorious hyperbolist Steven Wells said something like 'this record will make you piss blood and blaspheme in Spainish. Like me, it is strong and clean and perfect'. I'm certainly not going to refuse that praise (if praise it be), but I am aware that Swells may not have been in his right mind when he wrote that.

On the back of that, my bandmate/partner in crime Aidan and I went down to London to be interviewed by Ben Wilmott, a journo on the paper. Spiky Records was his label, not that there was anything even vaguely nepotistic or narcissistic about a music journalist having a record label. Actually, I thought Ben was a very sound guy - he liked my band Speakerfreaks - no, not the ones who released 'POS 51', we were the ORIGINAL Speakerfreaks.

Flipping it over, I note that Osymyso's name is on the label. He was quite cool for a bit, wasn't he?

Posted by ZakAvery at 21:54 No comments: