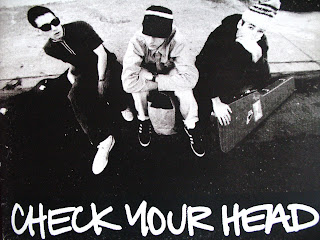 This was the album that cemented their place in all of our hearts. It's the sound of them growing up, finding themselves musically, and laying down the future direction for what they would do. It's the most live, organic-sounding album they did, and although they went back to more sample and loop-oriented tracks, it seems to me that this album enabled them to break free and listen to the music inside themselves.

And that, no doubt in common with millions of others, is what this album did to me too. It reminds me of a time in my life when "in my sleep I'll be thinkin' 'bout beats and gettin' on the mic and bustin' some treats". Yes, I was a slavish imitator of their white-boy rap styling, and as Superwack (I know, what was I thinking?), we were a bit of a low-budget copy, but damn, we rocked, hard, and didn't give a damn. Wearing an absurd oversize Carhartt work cap, 48" waist jeans and worn-out Vans. Carrying a spiral bound notebook and Bic Crystal pen for when inspiration struck - you can't properly write dope rhymes with anything but a Bic Crystal.

Essentially, this is the soundtrack to that part of my life when, in my mid-twenties, I was lucky enough to be able to do whatever I wanted, to please myself, to be idle and creative all at the same time. To me, this record is the soundtrack of an intelligent mind being taken off the hook and allowed to run riot. It's a reminder that nothing is an end in itself, and that everything is but one small point on a long journey. This record sounded like freedom then, and it still sounds like freedom now.

RIP Adam Yauch.
Posted by Zak Avery at 20:21 No comments: