Run DMC - 'Down With the King' 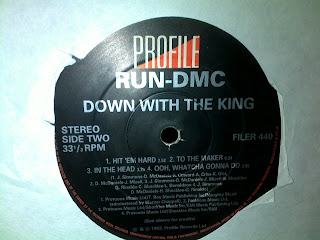 Run DMC are total hip-hop heroes of mine. Whenever I hear any of their records, they totally portray to me how the macho swagger of hip-hop can have a transformative power that operates outside of the usual hip-hop cliches. Or to quote Scroobius Pip from his awesome track 'Thou Shalt Always Kill' - 'Thou shalt remember that guns, bitches and bling were never part of the four elements [of hip-hop], and never will be'.

I've no idea when or where I bought this, and I'm sure it was just for the track 'Oooh, watcha gonna do' on this disc. But it never really got any asses shaking on the dance floor. In fact, it just got moved earlier and earlier in any set that I played, and althought people would come up to me and tell me how great they thought this track was, and how I was the only DJ they'd heard play it, nobody would dance to it. It's the musical equivalent on a dish of lambs tongues in a restaurant - even the people who know that it's a brave choice don't want to know.

I played it for a year or so, on and off, and then gave up. The rest of the album is OK, although Run DMC were going through a bit of a pseudo gangsta phase at this point - they look like Onyx on the cover, ferchrissakes.

But still, on the opening track, they sample themselves, from the track 'Down With the King' from the album 'Tougher Than Leather', and it sounds awesome. Hip-hop legends - believe it.

Posted by ZakAvery at 23:22 No comments: