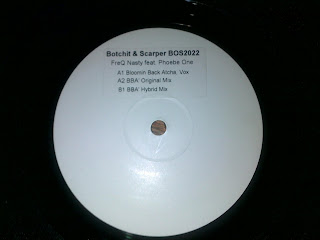 Bask in the day, I used to be really into vinyl hunting. Partly it was crate-digging - listening to loads of old records in the hope of finding a forgotten gem - but it was also the belief that, as a DJ, that was part of my job. I wanted to go out and dig out funky, groovy records that would make everyone shake their asses to a tune that they'd never heard before.

I don't know why I bothered.

But this is typical of the records that I bought in that spirit. It's a great big slab of bass-heavy hip-hop breakbeat, great production, great vocal, and in a just world, it would be the perfect transition from warming up the crowd to people actually shaking it. But I played this to blind indifference, and after half a dozen tries gave up on.

But when I put this on the other day, not only did it still sound fly and fresh, but my three year old son started dancing and having a stab at the vocals, which demonstrates to me that if only we could find our inner child a bit more, we'd not only have more fun, but I'd also look like a great DJ.