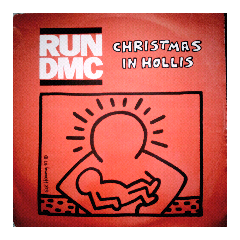 What a record. No, not the cheeseball title track, although that does have a certain swagger that demonstrates Rick Rubin's ability not only to polish a turd, but also have it mounted and displayed in a gallery and have people coo at it like the Damian Hirst of hip hop.

And not the track that follows it either, although 'Walk This Way' is a track that still hasn't lost it's visceral thrill despite repeated listens. If ever I'm lying unconscious, don't take my pulse or hold a mirror over my mouth. Just put on 'Walk This Way', and if I fail to purse my lips and do the angry pigeon head-nod, then finally I have found peace.

No, the star of the show here is of course 'Peter Piper', a track so simultaneously raw and full of life that every time you play it, you run the risk of B-boy zombies besieging your crib, screaming 'BEATS! BEATS!'

What does it remind me of? So many things. My first job. My first DJ set. The first time I managed to drop the opening acappella lines over another record (clue - the word 'piper' falls on the second beat of the bar). But most vividly, I played this at Dust in Leeds the week that Jam Master Jay was murdered. As I dropped the opening rhymes, someone walked up, choked up with emotion and cheap beer and reached out to shake my hand. As he did so, his sleeve caught the head of the stylus and zzzzzzzzzipped it of the record. Everyone turned and looked, and I screamed 'Jam Master Jay was killed this week, show some love people', dropped the needle back onto the record, and everyone went mental.